Chicken and Dumplings are made with big, fluffy homemade dumplings and juicy shredded chicken in a light and creamy vegetable-filled broth. The ultimate comfort food, learn how to make this easy and delicious one-pot chicken and dumplings recipe.

If you’re looking for nourishing comfort food then this chicken and dumplings recipe may be exactly what you’ve been searching for. One of those classic recipes that get made over and over again, it leaves you feeling warm, cozy, and always satisfied.

Similar to my favorite chicken soup recipe, this easy chicken and dumplings recipe is made with a mirepoix of onions, carrots, and celery; chicken breasts or chicken thighs; and dumplings made from flour, butter, milk, salt, fresh thyme, and baking powder.

Simple to make and delicious leftover, it’s hard not to love this nourishing classic.

What is Chicken and Dumplings?

Commonly found in the American south and midwest, this humble classic is believed to originate sometime during the Great Depression. Traditionally made by boiling an entire chicken in water, the broth would have then been used to cook dumplings made from a mixture of flour, shortening (or butter), and milk (or other liquid). Given the harsh economic times, the addition of vegetables was not always possible, but popular options included chopped carrots, celery, and turnip greens.

How to Make Chicken and Dumplings

In a large pot or Dutch oven set it over medium heat melt a little butter with olive oil and add the onions, carrots, and celery. Slowly cook the vegetables until they begin to soften then stir in the garlic and cook until fragrant.

2. Sprinkle with flour and add some broth:

To help thicken your chicken and dumplings, sprinkle the softened vegetables with all-purpose flour. Stir continuously until the flour dissolves into the veggies. Slowly add the water (or chicken stock) and dry white wine to the vegetables and bring to a boil.

Add the chicken, sugar, and bay leaves to your pot. Cover and reduce heat to low. Simmer for approximately 25 minutes – or until the chicken is fully cooked.

As the chicken simmers, whisk together the flour, baking powder, salt, pepper, and thyme. Use a spoon or spatula to dig a well, or hole, in the middle of the flour mixture. Add the milk and butter to the center and use a wooden spoon to mix it all together into a giant dough ball. Set aside.

Remove the chicken from the pot and set it aside. Allow it to cool for 5 minutes or so before shredding. Add the shredded chicken and the frozen peas to the pot. Return to a low boil.

Use a large cookie scoop to form equal-sized dumplings. Add each dumpling, one at a time, directly into the simmering soup, each in a different part of the pot. Gently press each dumpling down to submerge beneath the broth. Cover and reduce the heat to low. Cook the dumplings for approximately 20 minutes.

Remove the lid and stir in the half-and-half, parsley, and chopped thyme. Season with additional salt and pepper, to taste.

When are Dumplings Finished Cooking?

First, check to see if the dumplings are floating. If they’re not- they’re not cooked.

For especially large dumplings, you can also check by running a toothpick through the center. If the toothpick comes out clean, you know your dumplings are fully cooked.

How to Thicken Chicken and Dumplings

Can You Freeze Chicken and Dumplings?

Yes, chicken and dumplings are great both leftover and reheated from frozen.

What to Serve with Chicken and Dumplings

Chicken and dumplings is a meal within itself. Whenever I want to serve it with something extra, I’ll make a small green salad or fresh buttered bread.

More Soup Recipes to Try Next,

Have you tried making this Chicken and Dumplings Recipe? 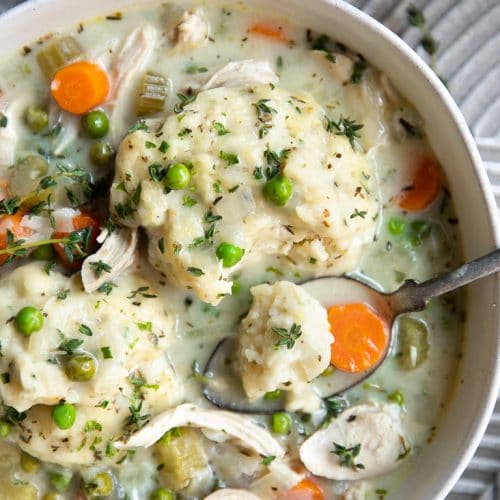