Given that my husband is HALF Indian, I have decided it would be fun to add some easy and delicious Indian recipes for all of you to try. After all, I am a huge fan of Indian food and need a place to keep all my favorites stored for safekeeping.

I’ve decided to start with the recipe for one of my all-time favorites – rich, creamy, and utterly irresistible chicken tikka masala.

Super easy to prepare, the flavor is out-of-this-world! Easily modified to be spicy, mild, or somewhere in-between, this recipe is guaranteed to have the whole family asking for seconds.

Serve with soft and fluffy white or brown rice, naan, cauliflower rice, or a fresh tomato salad to make it a complete meal!

There are two main parts to this recipe- the marinade and the sauce. Fear not, the list is not nearly as long as it seems (and many of the items listed are spices).

For the full list and amounts of ingredients, scroll down to the recipe card at the bottom of the page.

You’ll typically find this recipe filled with beautiful, smoky, delicious chunks of chicken breast that were marinated in a spice-filled yogurt sauce then grilled or cooked in a tandoor. Since most of us don’t have a tandoor or red hot coals just sitting outside our house, we’ll have to use the next best thing – a smoking hot skillet.

I prepared this recipe in my favorite go-to Dutch oven. Although non-stick pans and skillets have their place, I do not recommend that for this recipe.

So, even though, yes, it is traditionally made with chicken breasts, chicken thighs will give the best flavor given this particular cooking method.

How to make Chicken Tikka Masala

Step one. Marinate your chicken

This is the first, and arguably most important, step in making chicken tikka masala. Do not skip as this step is essential to the overall taste and flavor of this wonderful dish. Yes, that means that even if you only have enough time to marinate your chicken for 30 minutes, something is better than nothing.

Combine the chicken plus the marinade ingredients in a large bowl and mix well to coat. Cover and allow your chicken to marinate in the refrigerator for at least 30 minutes or up to three days.

So, your chicken has been marinated, now it needs to be browned. Grab your favorite pan, Dutch oven, or skillet (preferably one with tall sides) and get it nice and hot – like seriously HOT. Add a generous splash of oil to your skillet and swirl to coat. Add the chicken in a single layer and cook for 2-3 minutes on each side, or until brown and just starting to char. Do not crowd your chicken and do not move your chicken until it has cooked for at least 1-3 minutes and starting to brown. Each pan will give different results, but assuming you don’t BURN your chicken to death, a little charring is good.

Work in batches, as needed, until all the chicken has been browned. Set aside to a clean plate and scrape out any stuck-on charred bits of chicken.

Start by wiping down your pot to remove any brown bits that may have stuck to the bottom. Return to medium heat. Add a splash of olive oil and the onions. Cook the onions until softened and translucent, then reduce heat to medium-low.

Add the garlic and paprika and cook for 2 minutes, stirring often. Mix in the turmeric, garam masala, coriander, cumin, and cardamom powder. Cook for an additional two minutes, toasting the spices and stirring often (yes, it will look like a mushy, dry glob of onions covered in spices. Keep going).

Add the tomato puree and water, bringing to a low simmer.

And all of a sudden, that glob of spices starts to resemble a chunky curry sauce.

Reduce heat to low, and simmer for about 10-15 minutes, stirring occasionally to prevent the sauce from burning to the bottom of the pot.

Now, since curries are typically creamy and luxurious, we want to blend all this up. Remove from heat and puree your sauce using a high-speed blender. Return the sauce back to the pot set over low heat, making sure to return as much of the sauce stuck in the blender back to the pot as possible.

Add the cream, sugar, and butter.

Return the chicken to the pot and mix well to combine. Allow the chicken to simmer for an additional 5-10 minutes, or until fully cooked. Take care not to boil the sauce.

The exact origin is greatly debated.

While it is known that Chicken Tikka originated in the Punjab region of India, the origin of Chicken Tikka Masala is thought to be somewhere in the UK, including one hypothesis that it was invented by a Bangladeshi chef in Britain or another that it was created in an Indian restaurant in Glasgow, Scotland.

In any case, it is said that there are nearly 50 variations of this popular dish and that, although it is known as Chicken Tikka Masala, is often made using lamb, fish, or paneer.

There are two main differences between chicken tikka masala and butter chicken.

Have you tried making this Chicken Tikka Masala Recipe? 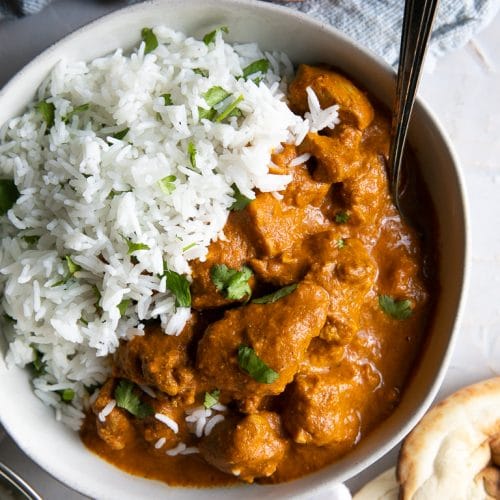