What’s the Difference between ghee vs. butter? Which is healthier? Here’s everything you need to know about ghee vs. butter including their history, nutrition, recipes, and uses.

Us home cooks tend to give a lot of thought to the stars of the show when dinner time rolls around—the proteins, the vegetables, the starches, etc. But sometimes we overlook the ingredients that work behind the scenes, like regular butter, oils, and other fatty acid foundations that boost flavor and richness.

In recent years, the Ghee vs. Butter conversation has been center-stage in the foodie world. What is this magical ghee everyone is talking about, how does it compare to butter, and how do we get the most out of each product in our daily culinary pursuits?

Let’s start with some simple definitions.

Now that we have some foundational knowledge let’s demystify this dairy product from the East and see how it compares to the good old-fashioned butter we know and love in the West. 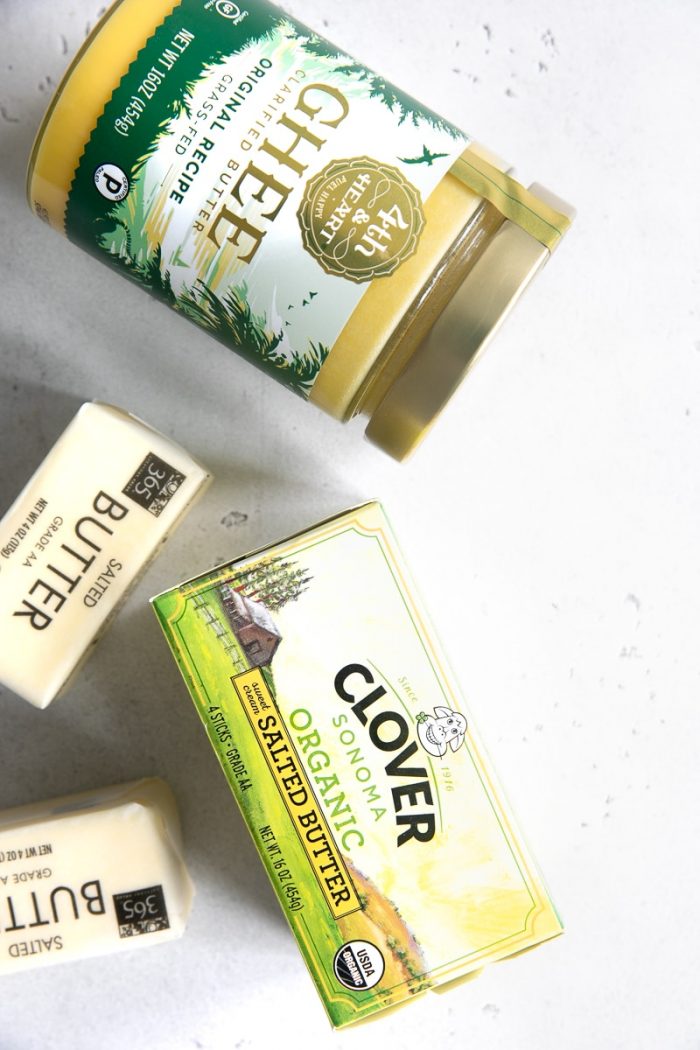 Both butter and ghee have been around since humans first began domesticating and milking animals such as cows, goats, and sheep. That means these ingredients have been produced for THOUSANDS of years. The American Butter Institute estimates that butter’s origins go back ten millennia!

The etymology of the word butter is widely believed to have come from the Greek word Boutyron, which translates loosely to “Cow Cheese.” However, historians agree that the first butter was probably produced from the milk, or casein, of sheep or goats, as cattle were not domesticated until much later.

An ancient limestone tablet, estimated at 4,500 years old, is said to be the first recorded instance of the use of butter in civilization. Other early writers like Pliny the Elder and Galen praised the delicate nature of butter despite the tough conditions in which it was produced.

As butter grew along with modern society, cultures across the world put their own twist on the product. Here are a few of the variations we’ve seen spring up through the ages.

When the 20th century rolled along, the world of butter was thrown for a loop by the introduction of butter alternatives. Americans, in particular, were under the impression that there were healthier options out there, looking to products such as margarine to fulfill their cooking needs.

From Parkway to “I Can’t Believe It’s Not Butter,” there have been many oil-based butter imposters, like olive oil, over the years. True butter enthusiasts know to stay away from these, although some say that margarine is more versatile when developing complex pastry creations requiring many layers of dough.

For example, margarine may be used in this Easy Apple Crisp Recipe, but we give a fair warning that the taste of the final product will not reach its full potential without butter.

The history of ghee, on the other hand, is shrouded in mystery and mythology, making it a far more intriguing study.

Lord of the Creatures, known as Prajapati in Hindu myth, is said to have rubbed his hands together in a cosmic act of creation in order to make the first batch of ghee for his earthly children. Certainly, a much more interesting tale to tell than simply churning some milk in a wooden barrel!

According to a 2019 editorial from the Washington Post, ghee is taken very seriously in the Vedic culinary tradition. In fact, it’s such a fundamental ingredient that Indian cuisine, an ayurvedic diet or Ayurveda, is often split between two categories – cooked with or without ghee.

In the past, food cooked with ghee was called pucca khana, while ghee-free food was known as kacha khana, which explains writer Awantha Vardaraj, who first tasted the ingredient with rice as a young kid.

His article goes on to recount the crazy story of how the United States Government offloaded millions of pounds of ghee to the Indian subcontinent in the 1950s to deal with a huge butter surplus. As it turns out, not everyone in India was pleased with this unexpected gesture.

In the great Ghee vs. Butter debate, nutrition needs to be a central focus as some have accused butter to cause heart disease while others rave about its vitamin A properties. Let’s run down a list of the basic nutritional data and then explore some other health benefits (and drawbacks) of each.

Per (1) teaspoon of Butter:

From a macronutrient standpoint, the nutrition of Ghee vs. Butter is negligible. However, the hidden health benefits of ghee may give it the edge over butter, according to Vardaraj, in his article for the Washington Post.

Ghee is thought to strengthen memory and intellectual capabilities, as well as reduce inflammation in the tendons and joints of the body. Since ghee has had many of its milk sugar and proteins (i.e. lactose and casein) removed, it is also ideal for people who want to cook with butter but need to avoid those dangerous dairy enzymes.

For the vegans out there, it should be known that ghee often contains trace amounts of butterfat, and therefore, ghee cannot get the complete vegan stamp of approval.

If you are trying to lose weight, we recommend sticking with ghee simply because you can cook with a lot less of it (similar to cooking with oil) while achieving similar results to butter.

You can make your own ghee in a fairly simple process, as outlined in the WP article, or you can buy it in jars at most major health food stores. Just be glad that the days of margarine and other trans-fat loaded butter alternatives are over, and the era of healthy grass-fed ghee is here to stay. If you’re a keto follower then this is amazing.

Butterfat content is the big distinction in the Ghee vs. Butter breakdown and will determine how you want to use each ingredient in your recipes.

For example, a recipe such as our Chicken Pot Pie Soup with Buttermilk Biscuit Crumbles calls for butter and would not be as rich or delicious if you were to substitute ghee. In fact, the texture of the dish would likely be compromised and not worth making in the first place.

On the other hand, this 5-Ingredient Butternut Squash is a super ghee-friendly dish, whether you roast, toast, or sauté your vegetables. The natural nuttiness of ghee is the perfect complement to the squash and pine nuts featured in this dish, so definitely give it a try when fall rolls around.

When it comes to proteins, you want to consider the natural fat content of the meat before picking between ghee and butter. For example, a very fatty piece of steak does not need much butterfat to come to life, while a lean piece of pork will likely require a big slab of butter in the pan.

While you can try cooking with ghee, just like any other oil, Indian dishes are truly the best way to experience the ingredient. Basmati rice, with its natural nutty aroma, is a perfect starch to try with ghee. Check out our basmati rice recipe or Biryani Recipe and substitute ghee to bring it to a new level.

From a technical standpoint, remember that ghee has a significantly higher smoke point than butter, making it a better candidate for pan-frying foods at very hot temps.

While butter begins to burn at 350 degrees Fahrenheit, ghee will not begin to smoke until it approaches 485 degrees! Keep that in mind the next time you want to sauté meat or vegetables at high heat.

It should go without saying that butter can’t be beaten when baking cookies, cakes, and other homemade sweets. If you want to use ghee in the bakery, try sticking with savory creations like flatbreads and crackers, but there really is no alternative to full-fat butter in the pursuit of the ultimate dessert.

It wouldn’t be fair to pick a superior product in the Ghee vs. Butter conversation, because each ingredient has its own pros and cons. Some dishes demand decadent butterfat while others benefit from the crispy, nutty flavor that can be achieved in its absence.

At the end of the day, however, these two products are far more similar than they are distinct. Whether you’re roasting vegetables, pan-frying some steaks, or blending fat into your morning cup of Bullet-proof coffee, both ghee and butter are going to do the trick.

As always, stay tuned to The Forked Spoon to learn more about the fun and funky ingredients of the world and expand your culinary repertoire!

If you try a recipe, please share it using the hashtag #theforkedspoon or by tagging @theforkedspoon.
34 shares