A big pot filled with comforting Split Pea Soup is the perfect way to stretch that leftover holiday ham just a little further. Somewhat ugly in looks, but delicious in taste, Split Pea Soup with Ham is one of those feel-good recipes I look forward to making each year.

You see, Split Pea Soup (or Snert to all my Dutch friends) is a family tradition at my house. Somewhat predictable come the holiday season, my family would make a holiday ham for Christmas day and follow-up with Split Pea Soup just as soon as we worked through the leftovers.

Split Pea Soup, or Pea Soup, is a soup made from dried peas, usually split peas. With variations from many countries and cultures, Split Pea Soup may look green or yellow, come served with or without meat, and may be served thick or watery.

There are two versions of Split Pea Soup that I know and love- the American version and the Netherlands version.

Each version, the American and the Dutch, deserve their own post as they are so different. And, despite my heavy Dutch roots, I must admit that I prefer the watered down American version of this delicious stew. My husband, on the other hand, prefers the Dutch version. 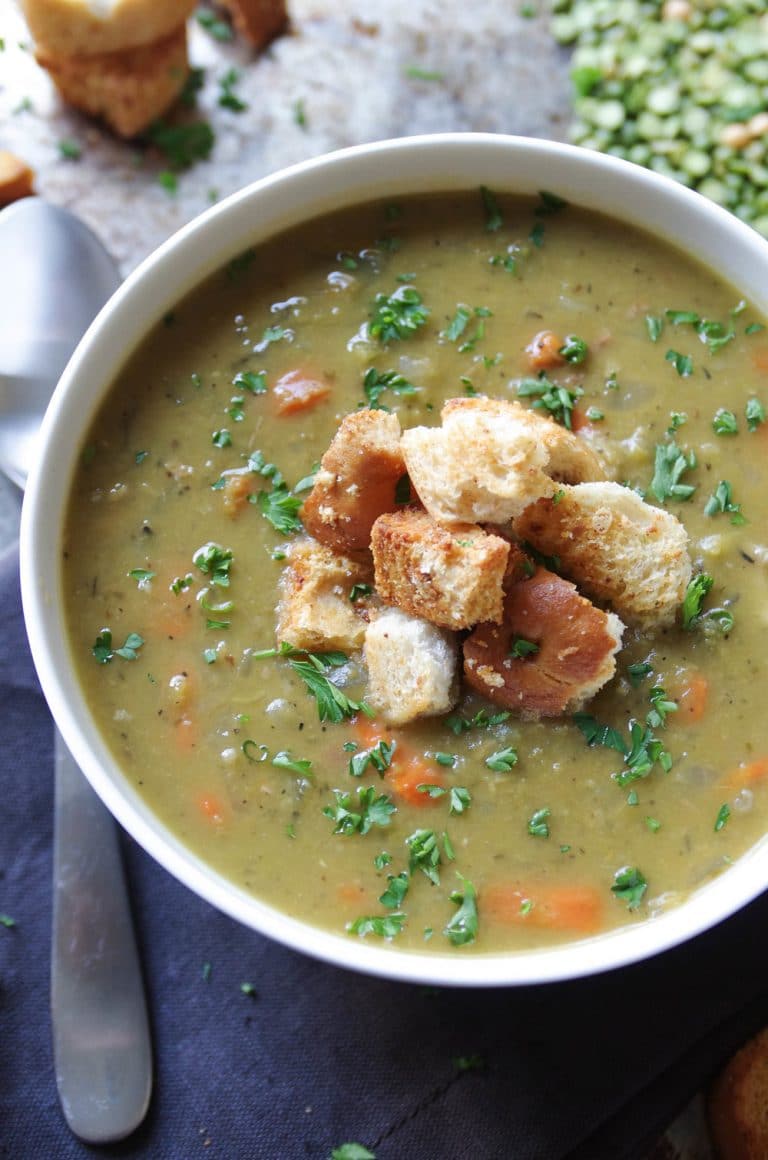 What are Split Peas?

Split Peas are a type of field pea grown specifically for drying.

Split peas become split peas when the peas are hulled and then split in half either manually or by machine at the naturally occurring split in the seed’s cotyledon. Grown in both yellow and green varieties, split peas are used in a variety of dishes from soup, to curries, to stews. Yellow split peas tend to be somewhat milder in flavor, while green split peas are sweeter.

Also like lentils, split peas are packed full of awesome of nutritional benefits.

How to make Split Pea Soup

To make this Split Pea Soup Recipe you may either pre-boil the leftover ham bone (as I did) or add the ham bone at the same time as the split peas. If I have an especially large ham bone I will always boil the bone separately and divide the broth in half to use in two separate soups.

This, of course, is completely optional as it will add an additional hour to the cooking time. As I only make one ham each year and I love deeply flavored soups, I like to really make my ham count.

Start by placing your ham bone in a large stockpot and cover with cold water. Bring water to a boil over high heat. Reduce heat and simmer for one hour. After an hour or so, remove the ham hone and strain the broth through a fine mesh strainer into a large, clean pot. Set aside the bone to cool.

Meanwhile, chop and prepare plenty of vegetables. I like to add at least two medium onions, lots of carrots, celery, and garlic. Feel free to add chopped leeks or potatoes, too. Cook the vegetables over medium-low heat for at least 10-15 minutes, stirring often. The idea is to soften and enhance their flavor, but not caramelize them.

Once the broth is ready, add the bay leaves, split peas, thyme, and approximately 10-12 cups of broth. You may season with a pinch of salt and pepper, but I recommend waiting to add too much additional salt until closer to serving. As the soup returns to a simmer, remove as much meat from the pork bone as possible and add to the pot.

Allow the soup to simmer for at least 2 hours as the split peas will cook down and thicken over time. I do not puree my split pea soup with an immersion blender or stand blender as I prefer a somewhat chunkier soup.

Once the split peas have cooked fully, you may adjust the thickness and seasoning to your personal preference. The longer you simmer your soup, the thicker it will become. Should you find that your soup is too thick, simply add extra water or stock. Also, keep in mind that this Split Pea Soup with Ham will thicken considerably as it cools. 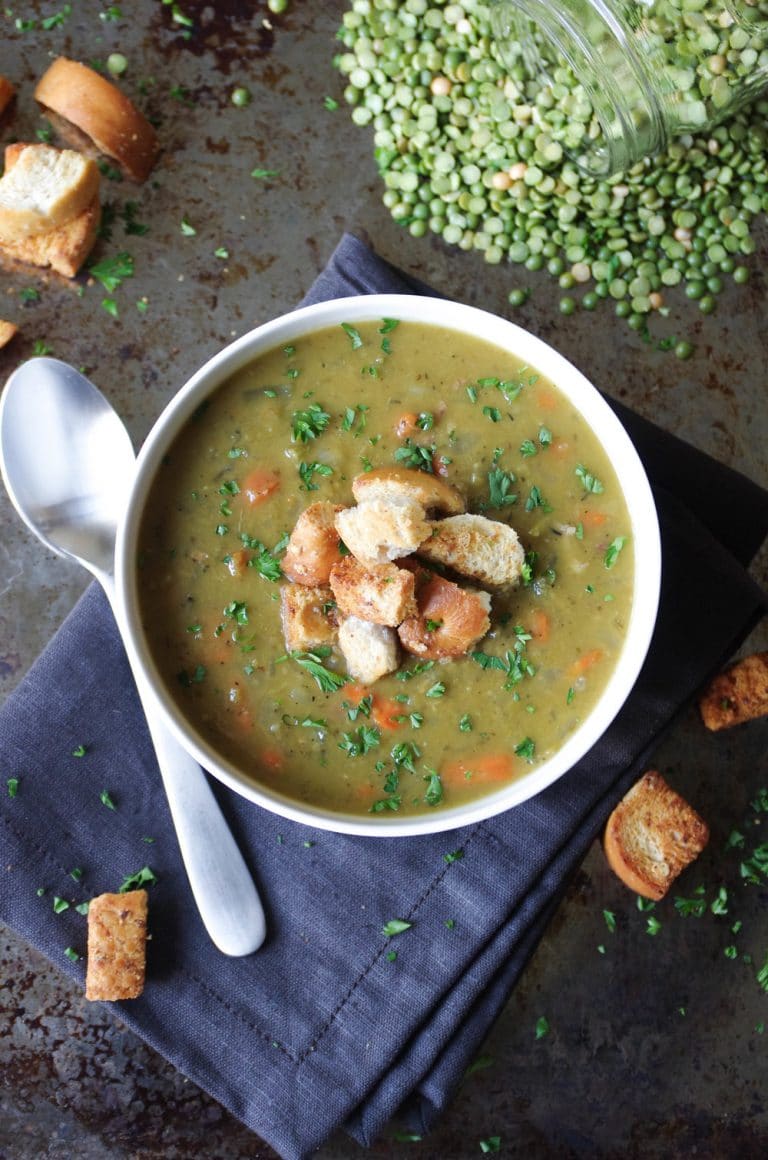 First, split pea soup is even better leftover the next day (or two days later) than the day it was made. The flavors really have time to marinate and mix together.

If, however, you’re not really into the leftovers, you can easily freeze this leftover split pea soup with ham for a quick family meal or in pre-portioned containers for lunch.

How to freeze split pea soup:

To thaw, transfer frozen bags of split pea soup to the refrigerator to thaw overnight.

How to make Split Pea Soup without Ham or Pork

It is easy to make this split pea soup recipe without the addition of any ham or pork. In fact, you can easily prepare this delicious and hearty wintertime soup without any animal products at all.

Simply leave out the ham bone and use water in place of any kind of broth.

Still loaded with healthy vegetable flavors, add a teaspoon of smoked paprika for some extra smokiness and season with additional salt and pepper as needed. 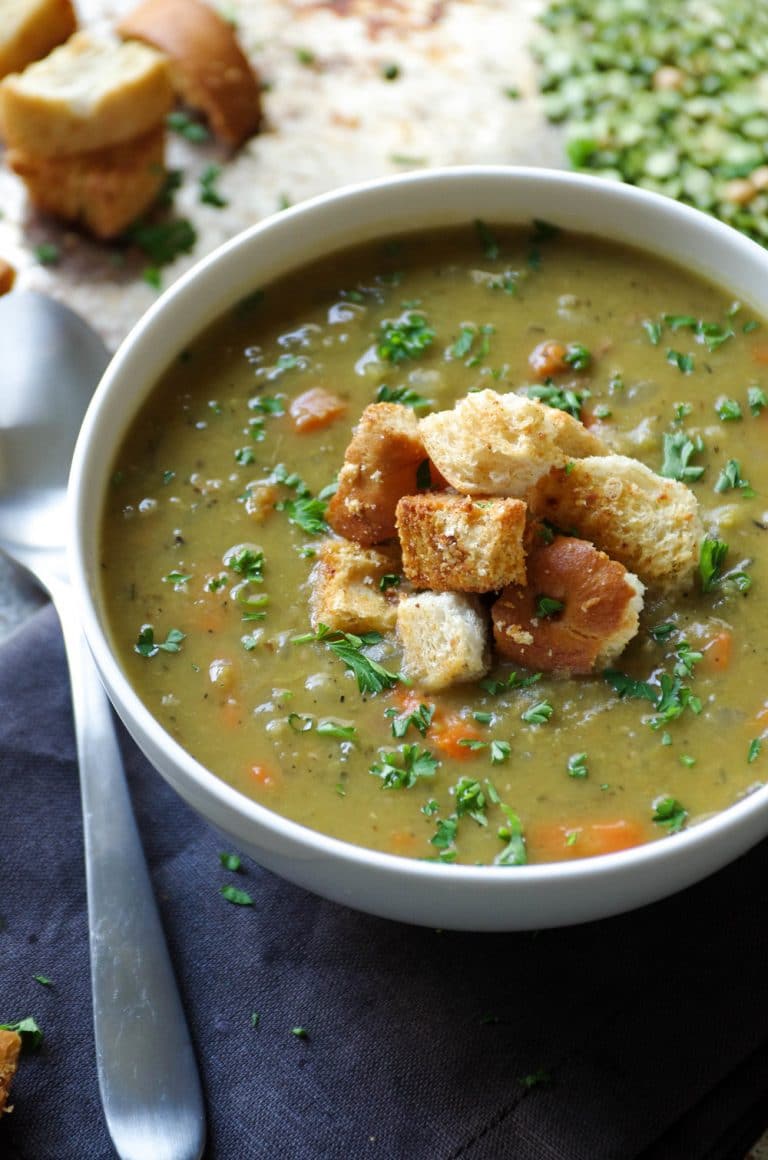 If you try making this Split Pea Soup with Ham, please leave me a comment and let me know! I always love to read your thoughts and feedback!

For more soup recipes check out,

DON’T FORGET TO PIN AND SHARE THIS SPLIT PEA SOUP RECIPE FOR AN EASY AND FLAVORFUL DINNER AND LEFTOVER HAM RECIPE.

LOOKING FOR SOMETHING SPECIFIC? CLICK HERE TO SEARCH BY INGREDIENT