This Udon Noodle Soup has Bok Choy and Poached Egg, making it an all-round healthy and comforting meal. 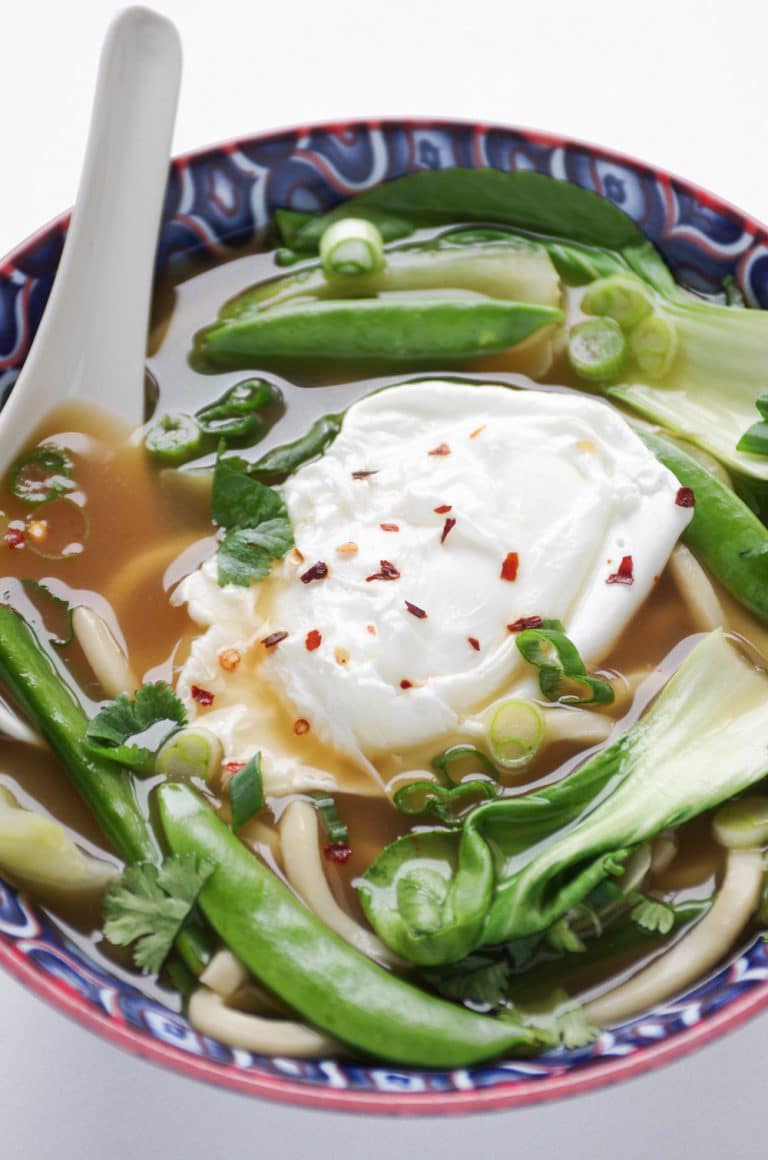 Well, in just a couple hours, I will be brought back to the reality of life with a toddler. The little break has been wonderful, but I miss my little guy (though I wouldn’t refuse another night or two). I even miss some of the madness that comes with him.

According to my mother-in-law, no tears were shed and there was no mention of my name. Success!

Now, there was once a time when I feared such a day. Being the highly emotional, sleep-deprived (still am, I’ve just adapted) and kinda crazy first-time mom that I was, I had an irrational fear that my child would love my mother-in-law more than he loved me. My head (mostly) free from the fog of having an infant, I now see what a huge gift it is to have such an incredible mother-in-law and Nana for Octavian. Especially one that lives so near to our house.

So, while Octavian flew kites, ate popsicles and probably watched far more television than I would allow, the husband and I watched House of Cards (still am) and didn’t do much of anything.

Oh wait, unless you count eating as doing something. After splitting a bottle of champagne that had sat in our refrigerator since new years eve, we (lightweights) ate burritos the size of our head. Literally. Have you been to Freebirds before? Well, they have a jumbo burrito and you can add whatever toppings you want. The guy could barely roll my chicken and carnitas burrito together (because, you know, I couldn’t decide which meat I wanted so I got both).

So what does one do after eating a burrito the size of their head?

If you answered eat dessert then you and I are already best friends. But seriously, I ate dessert.

Again, the indecisive person that I am, I bought a small chocolate cake AND berry tart for dessert. Between the husband and I each are more than 2/3 finished.

Then I fall asleep.

That’s right, you guys. Even earlier than I usually go to sleep. We sure know how to party hard over here at our house. 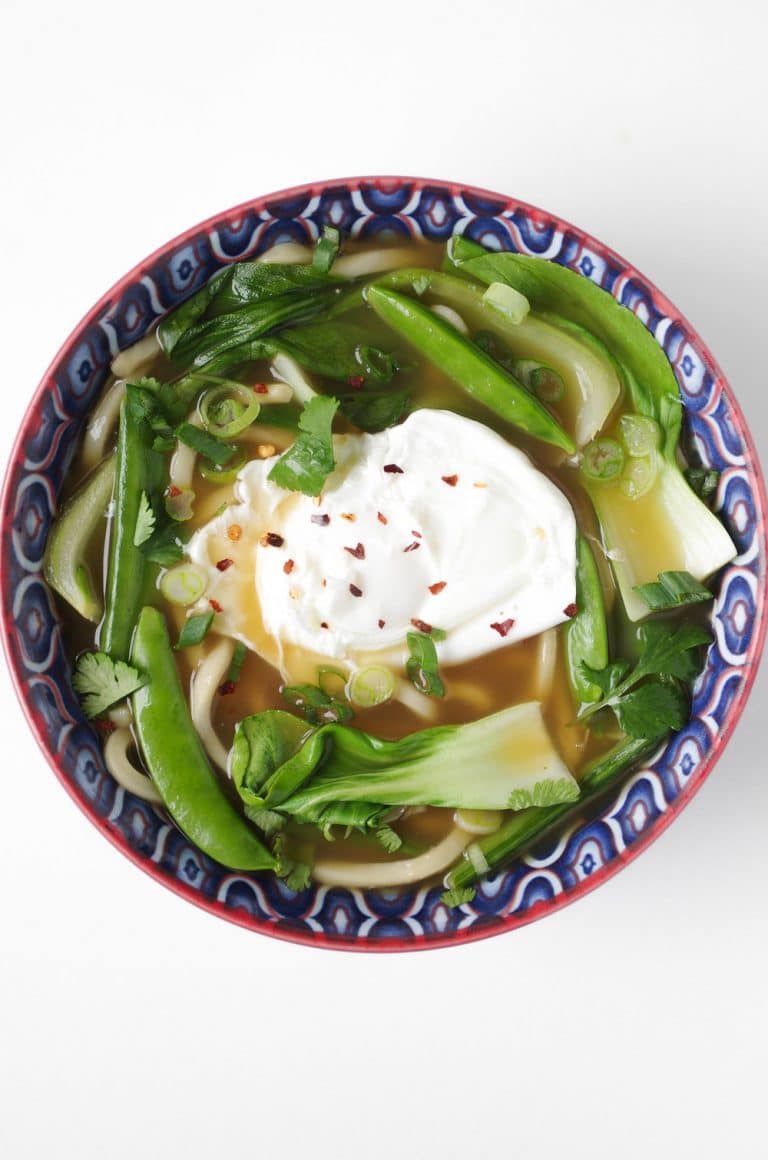 So, once again, it’s Sunday and the start of another week. Last week I was prepared for the start of spring. It was warm and sunny and felt like we had seen the end of winter.

Yeah, rain is forecasted for the next 9 days. NINE! I have no idea what I am going to do with my toddler or puppy. The three of us, well, let’s just say we don’t play well indoors.

But, there is always a silver lining and in this case, it means soup and stew. Who knows, this may be last soup hoorah of the season, and warm, comforting soup and stew with buttery, crusty bread always makes me happy. always.

Especially when the soup only takes 20 minutes to pepare.

This impressive udon noodle soup with bok choy, sugar snap peas and poached eggs is the easiest soup I have EVER made. It is also one of the tastiest. The broth is simple with hints of anise and cinnamon and filled with soft udon noodles and crunchy vegetables. The egg is just the cherry on top.

I could have easily eaten the entire pot, but I’m pretty sure this post clearly established that I love good food and I love to eat 🙂 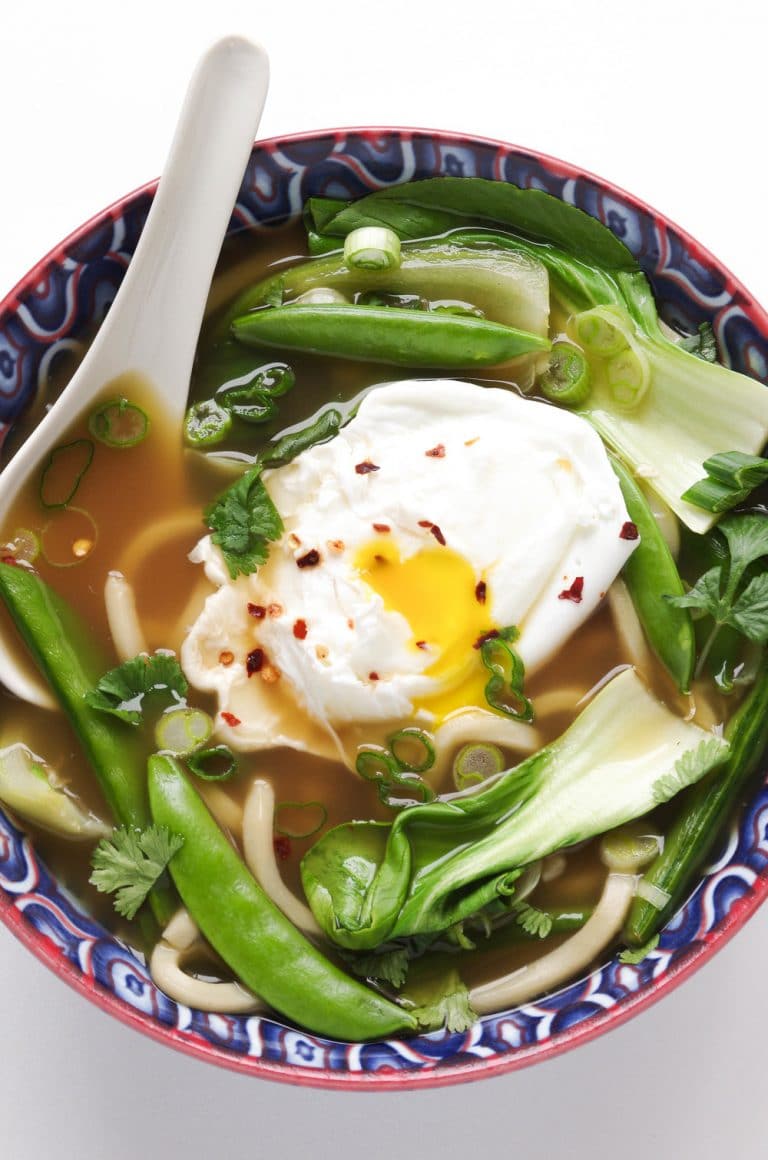 Keyword udon noodle soup, udon soup
Did You Make This Recipe? Tag it Today!Mention @theforkedspoon or tag #theforkedspoon and please leave your star rating in the comment section below.
1.2K shares