Home » US Travel » Hawaii » Getting to Paradise is a Bitch: Part I

Usually around this time of year, the fiance and I take a trip somewhere.
Back in 2008 we escaped to Kauai to hike the Kalalau Trail.
Prior to this little adventure, I had never truly been camping before,
…you know, like in a tent.
If I had known before I got on the plane how this trip was going to turn out, I may have said screw it and just stayed home.
…………………………………………..
After picking up some food and hitch hiking to the camp spot, we arrived at our home for the night.  This was a public camp site and one that  most people drive their cars up to.  We were only staying here one night.  The next morning we planned on hiking the first half of the Kalalau Trail- a challenging, but breathtaking 6 miles.
We ate a salami and cheese sandwich, got in our sleeping bags and started to drift off to sleep… 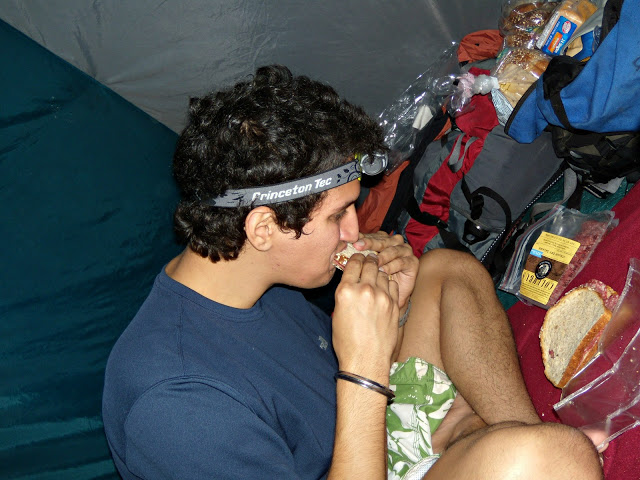 Problem #1:
About an hour later it started to rain.
I noticed that some of the water was starting to leak through the tent.  I woke up the fiance, who was fast asleep, and broke the news.
He responded, “It’s just condensation.  It’s fine.  Go back to sleep”.
…sigh…
My friends, this was not condensation.
The rain started to come down harder and more water started to seep through the tent.  I woke him up again, put his hand in the puddle next to my sleeping bag and yelled calmly explained that the puddle I was drowning in was NOT condensation…
I’ll admit, the rest of the night was a bit of a blur.
Remember- I had never camped before.
The only time I slept outside was when I was 10-years old and wanted to have a sleepover in the back yard.
The fiance and I argued over what to do next.
Do we move the tent or leave it where it was and just let the water seep through?
I recalled a picnic area that provided a small area of coverage that we could move the tent under.
After some deliberation we decided to go for it.
Dragging the tent to the covered area was tricky.  Not only did our entire bodies end up soaked with water, but so did everything else- sleeping bags, clothes, towels, EVERYTHING.
The rain was out of control and no matter how hard we tried, there was no escaping it.Defeated, the fiance and I curled up in our wet sleeping bags and wet tent and tried to steal as much body heat from each other as possible.

The thunder and lightening was so fierce, I felt like I was at a dance club that just so happened to be flooded, dark and cold.

Despite the worst night sleep of my life and possible hypothermia, we woke up to clear blue skies and a beautiful white beach…
Life was good.

And would have been even better in a hotel that night.  Unfortunately the fiance had other plans. 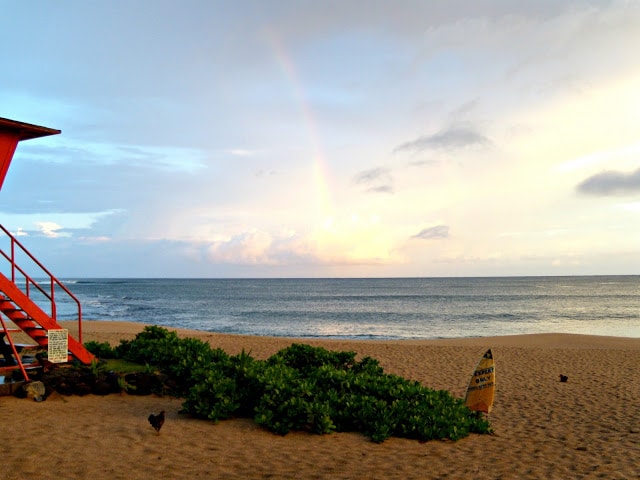 The fiance left me to hang out with some local hippies while he hitchhiked back to town to get a new tent.
My new friends thought it would be funny to have me try a new fruit.
(unfortunately, I have no idea what the name of this fruit is)
This was not a fruit.This was ROTTING POOP grown on a tree.

The fiance returned with a new tent and was ready to get going.
It was 1:30pm.
Some background:
The fiance did this trail a couple years earlier with some college buddies.  I assumed he knew the trail well enough to know how much time it would take to get to the campsite.
I, on the other hand, had no idea what I was doing.  I had never really been hiking before and had no idea what to expect.  If I knew back then what I know now I would have RUN to the nearest hotel.
Since I was completely clueless, I agreed to set off that afternoon to campsite#1.
By the time we got to the actual trail head it was at least 2pm. 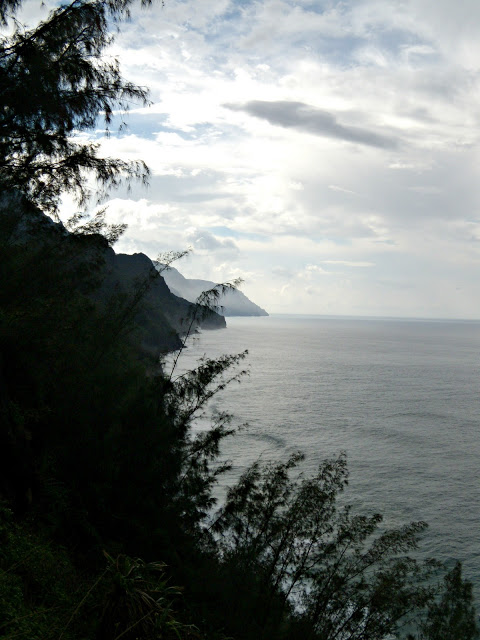 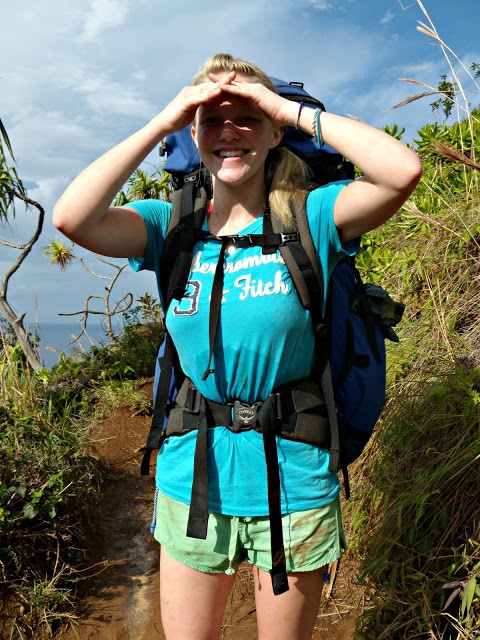 Problem #2
The fiance and I never obtained camping permits.
Unfortunately, due to the extreme weather the night before, there was a Park Ranger posted about a mile in turning people back.
She warned of dangerous trail conditions and that the beach we would need to cross was completely washed out and impassable.
Just an FYI: My fiance is stubborn.
He responded that we would only be going ahead a little further and turn around.   She let us pass- i’m still not sure why, as we clearly had ginormous backpacks on our back.
At one point, we did have to duck and hide from some other rangers and make a mad dash across the beach as the waves receded.
This was some dangerous business, my friends, and incredibly stupid.
We pushed on.  It didn’t take long to learn that this was not a walk in the park.
I may be able to run 13 miles, but hiking is an entirely different business.  Hiking is hard. 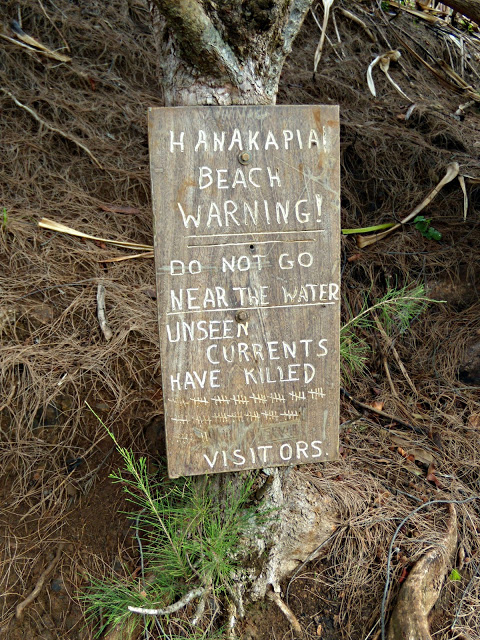 Problem #3
The day we started this little hiking adventure was New Years Eve, which meant that the sun was down and gone by 5pm.  I don’t think the fiance fully took this in to consideration when he decided to have us leave at 2 pm to hike 6 miles.
(Your average 6 miles is easily done in 2 hours.  This was NOT your average 6 miles)
It started to get dark, and I started to panic.  I had no idea how much longer we had to hike and it became clear that the fiance didn’t really know either.  Whenever I would ask how much further we had to go he would answer,
“right after this next valley”.
10 valleys later and we were still hiking.
We pulled out our headlamps and continued.  Really, what choice did we have?  The trail was on the side of a cliff that dropped down to the rocky ocean.
Sleeping in the rain, I can handle.
Sleeping on a cliff, hell no.
(side note: I quickly learned that I am afraid of heights. awesome)
So, we’re walking, and walking and walking.
Suddenly it goes black.My headlamp stops working.
Just imagine:
Hiking on a narrow cliff.
In the pitch dark.
With the person you love, who also, at this moment, is the most stupid and stubborn person you have ever met.
Your headlamp is your only source of light.  It’s your eyes.  And it stops working.
What thought passes through your head?
I AM GOING TO DIE.
OMG, I AM GOING TO DIE.
To be continued…