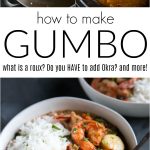 Savory and delicious, this mouthwatering Gumbo Recipe comes filled with chicken, Andouille sausage, and seafood and brings all the flavors of New Orleans home cooking right to your dinner table.

Hearty, delicious, and packed full of amazing and well- seasoned ingredients, this Gumbo has officially taken place as one of my top five favorite recipes (right up there with my Jambalaya Recipe). In this version, I decided to combine all the essentials – seafood, chicken, and spicy Andouille sausage – to make the very best Gumbo recipe.

Before getting started on this recipe I encourage you to read through the ingredient list and the post. Yes, the whole thing. Ok, if you insist on skipping anything, skip the “What is Gumbo” section.

Here’s the thing, it’s is filled with tons of tips and tricks to get you the best tasting Gumbo recipe, too. Gumbo, a million time worth the time and energy, is not a recipe you should make if you are in a rush.

You will need at least three hours to make this recipe (properly), with much of that time spent actively stirring your roux (see below). So, pour a cup of coffee (or wine) and grab a friend (or your favorite movie) because this isn’t a recipe that should be rushed.

Good news? This Gumbo recipe makes a lot! Enough to feed a small party or your family for several days.

The exact origin of what we have come to know as Gumbo is somewhat debated, but it is often used as a metaphor for the melting pot of cultures that have come to exist in southern Louisiana. A perfect combination of French, Spanish, indigenous tribes, African, Italian, and German culinary influence, it is known that people from each of these cultures lived together in a small area in the 18th and 19th centuries.

In order to keep the history lesson somewhat short (it’s lengthy), I’m only going to touch on the key points.

Regardless of its official origin, Gumbo remains, for obvious reasons, the official state dish of Louisiana.

Like most well-known dishes, there are several variations of this popular stew.

However, several key elements are found in nearly all Gumbo recipes- a stock, meat or shellfish (or both), a thickener, and the “Holy Trinity”.

Why is Gumbo called Gumbo?

The answer is actually found in its name.

In several West African languages, the word for Okra is ki ngombo, which is also known as, gombo.

What is the “Holy Trinity” of Cajun Cooking?

The “holy trinity” of Cajun cooking, or “holy trinity”, is a soffrito-like mixture consisting of finely diced onion, celery, and green or red bell pepper. If you’re thinking, “right, ok, but what is a soffrito?” don’t worry, I was super confused by this as well.

In general, Cajun cuisine is view as less refined and more of a “country food”. These Acadian exiles, also known as Cajuns, didn’t have access to some of the luxuries that Creole people had thanks to trade. As such, Creole cuisine is often viewed as “city food”.

This recipe is mostly a Creole Gumbo… but with chicken and a roux made with bacon drippings and butter.

What is the difference between Gumbo and Jambalaya?

This is a really fantastic question. Although quite similar, there are several major differences between Gumbo and Jambalaya.

The easiest way to remember the difference between the two is that Jambalaya is, at its core, a rice dish (much like paella). Of course, it has protein, vegetables, sometimes tomatoes, rice and stock that are simmered together to make one big happy pot of spicy rice.

Gumbo, on the other hand, is more of a soup. Like Jambalaya, Gumbo contains a mix of vegetables and meat and some kind of shellfish, but the overall stock is thinner. In addition, the rice is cooked separately and added when served.

Ingredients in this Louisiana Gumbo Recipe

There are three main thickeners for any Gumbo recipe- Filé powder, Okra, and the Roux.

I included all three thickeners in this Gumbo recipe. If you cook your roux long enough, hopefully, it will lose most of its thickening powers and just be there to flavor the stew.

Take a deep breath and repeat after me, “I can do this”.

Ok, awesome, because I know you can! Here’s the thing, you guys- making roux really isn’t all that hard. Read the steps, be attentive, have patience, and you’ll be good. The hardest part is the constant stirring.

What is a Roux?

How to make a Roux for Gumbo?

How to make Gumbo

The first thing you need to do is make the roux. Since we’ve already discussed how to make the roux, I’m going to skip over that part. Hopefully, however, if you’re planning to enjoy this Gumbo recipe sometime around 6 pm for dinner, you’re starting this recipe by at least 2 pm. Ok, good.

Now, normally, if we were making a relatively low-maintenance sauce, I would have you multi-task, and do the next step at the same time. However, seeing as though roux is not low-maintenance and actually quite sensitive, let’s just wait for it to finish.

Cook your chicken in an even layer for approximately 2 minutes per side. There is no need to fully cook the chicken as it will be added back to the Gumbo later to finish cooking. Remove the chicken to a clean plate and set aside (but keep the skillet as you’ll need that in just a sec!).

Grab one more extra large pot (or transfer the roux to a clean bowl and set aside so that you can clean and re-use the large pot that had been used previously). Bring the chicken broth and bouillon cubes to a boil. Once boiling, cover and reduce to a simmer.

As the broth comes to a boil, return the skillet that cooked the chicken to medium heat. Add one more tablespoon of oil and cook your “Holy Trinity” (onions, celery, and bell pepper) for approximately 6-8 minutes, stirring frequently. Add the garlic and cook for an additional 30 seconds. Reduce your heat to medium-low and add that roux to the “Holy Trinity”.  Mix well to combine and cook, stirring continuously, for 1-2 minutes.

Remember that pot of boiling broth? Slowly add Roux and Holy Trinity mixture until fully combined with the broth.

Are you still with me? Hello?

I know, the roux is long and boring and as soon as that’s over a million different things start to happen. Don’t worry, we’re nearly done.

Now we’re going to add a bunch of things. But first, make sure the heat is reduced to a simmer. Add the hot pepper sauce, bay leaves, 1 tablespoon Cajun seasoning, dried thyme, diced tomatoes, and tomato sauce. Mix it up. Reduce heat to low and let your Gumbo simmer for at least 45 minutes.

Meanwhile, we need to do something with all that Okra, right? Here’s what you’re going to do- melt 2 tablespoons of butter in a large skillet over medium heat. Add the chopped okra and distilled white vinegar and sauté for approximately 10-15 minutes, stirring frequently (see image above).

Once your Gumbo has been simmering for approximately 45 minutes, add the cooked okra, chicken, and sausage to the pot. At the same time, add the Worcestershire sauce, crabmeat, and sea scallops.  Simmer all together for an additional 20-30 minutes.

Season to taste, since, you know, that’s pretty important. Finally, 5-10 minutes before serving add the shrimp and stir in the Filé Powder. Continue to simmer until shrimp are fully cooked.

What to serve with Gumbo

Gumbo is traditionally served over hot rice. The addition of rice helps feed a much larger number of people, making Gumbo a practical and economical dish for feeding a crowd. Often, you may also find Gumbo served with some kind of fresh bread, or, in some Cajun families, a side dish of potato salad.

I find that this Gumbo recipe really is a complete meal all in one. Served with rice or bread, it covers all the major food groups – starch, protein, vegetables, and fat. Ok, just kidding, it’s missing fruit. So perhaps, serve Gumbo with a bowl of fruit salad for dessert. And, for a more low carb version, swap the rice with cauliflower rice.

Can you freeze Gumbo?

melt 2 tablespoons of butter in a large skillet over medium heat. Add the chopped okra and distilled white vinegar and sauté for approximately 10-15 minutes, stirring frequently. There are several ways to freeze Gumbo.

If I had to pick one of these, I would pick option number 2.

The reason being that most of the lengthy, time-consuming grunt work has been done already, but the meat hasn’t been added yet (chicken, sausage, and especially seafood). Now, everyone will tell you “sure, go ahead and freeze the previously frozen, thawed, and cooked shrimp”. But I’m going to tell you that, unless you have to, don’t do it.

Why spend good money on delicious seafood just to freeze it and mess it up?

Chicken and sausage is a little less forgiving to freezing, but seafood? Not so much.

If you try making this Gumbo Recipe, please leave me a comment and let me know! I always love to hear your thoughts.

LOOKING FOR SOMETHING SPECIFIC? CLICK HERE TO SEARCH BY INGREDIENT 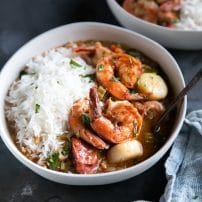