This gumbo recipe is the perfect combination of Cajun spices mixed with juicy chicken, Andouille sausage, and fresh seafood swimming in a flavorful roux-based broth and served with a side of rice. So comforting and delicious, enjoy this classic New Orleans meal any time of year.

Packed full of hearty and well-seasoned ingredients, this gumbo recipe is one of my very favorite recipes (right up there with my Jambalaya). In this version, you’ll find all the essentials – seafood, chicken, and spicy Andouille sausage – to make the very best gumbo recipe ever.

Before getting started, I highly encourage you to read through the ingredient list and the entire post. Yes, the whole thing. Ok, you can skip the “What is Gumbo” section. What you’ll find are tons of tips and tricks to help you make the very best tasting gumbo recipe.

Gumbo takes approximately 2-3 hours to make, start to finish, and isn’t really a recipe that should be made if you are in a hurry. It is a million times worth the time and energy but does take some time to come together.

Fortunately, this recipe makes a lot – enough to feed a small party or your family for several days.

If you love this gumbo then you’ll definitely love these other New Orleans classics including Shrimp Étouffée, Dirty Rice, and Easy Red Beans and Rice.

The exact origin of what we have come to know as gumbo is somewhat debated, but it is often used as a metaphor for the melting pot of cultures that have come to exist in southern Louisiana. A perfect combination of French, Spanish, indigenous tribes, African, Italian, and German culinary influence, it is known that people from each of these cultures lived together in a small area in the 18th and 19th centuries.

In fact, gumbo gets its name from the word ki ngombo, or simply gombo; the word for okra in several West African languages.

Regardless of its official origin, Gumbo remains the official state dish of Louisiana. And, like most well-known dishes, there are several variations of this popular stew.

Several key elements, however, are found in nearly all Gumbo recipes: a stock, meat or shellfish (or both), a thickener, and the “Holy Trinity”.

Making roux really isn’t that hard. If this is your first time, read the steps, be attentive, have patience, and you’ll be good.

A Roux is made by cooking together flour with a fat (lard, butter, oil) and is used to thicken or flavor sauces, soup, and stew. Typically made from equal parts flour and fat and cooked to varying shades of doneness depending on if the sauce will be used to thicken or flavor a dish. Compared to étouffée, which uses a roux to both flavor and thicken, here we’re using the roux to mostly flavor the dish.

How to Make Roux for Gumbo?

Set a large pot, pan, or Dutch oven over medium heat. Melt the fat that you plan to use (in this case we’re using bacon drippings and butter). Once the butter is fully melted, slowly whisk in the flour, little by little, until all of the flour has been fully incorporated.

Continue to cook over medium heat for 1-2 hours, whisking continuously.

The color will change from a creamy off-white to a light caramel, to a darker mahogany brown color, and finally, a chocolate brown color.

Anyone who says that you can have a dark, perfect gumbo roux in 30 minutes or less is a liar (sorry, not sorry).

Now, you may need to play around with the heat. For example, if your roux is staying the same color for more than 20-30 minutes, it’s a sign that the heat needs to be increased just slightly. That said, do not burn your roux or you will have to start over.

How to Make Gumbo

I do not recommend multi-tasking unless you’re super confident in the kitchen.

Once the roux is finished, set it aside and pull out a large skillet. Quickly pan-fry the sausage over medium-high heat. If the sausage is already cooked, that’s ok. I still like to fry it up a bit as it adds a bit of extra flavor.

As the sausage cooks, toss the chicken in a bowl with olive oil, paprika, and some Cajun seasoning. Let the chicken rest until the sausage is finished cooking. Remove the sausage to a clean plate and set it aside.

Add the chicken to the same skillet. Add additional olive oil if needed. Cook the chicken for about 2 minutes per side.

There is no need to fully cook the chicken as it will be added back to the Gumbo later to finish cooking. Remove the chicken to a clean plate and set aside (but keep the skillet as you’ll need that in just a sec!).

Get one more extra large pot (or transfer the roux to a clean bowl and set it aside so that you can clean and re-use the large pot that had been used previously).

Bring the chicken broth and bouillon cubes (if using) to a boil. Once boiling, cover and reduce to a simmer.

As the broth comes to a boil (yes, we’re multi-tasking now), grab the skillet that previously cooked the sausage and chicken to the stovetop and set over medium heat. Add one more tablespoon of oil and cook the mirepoix (onions, celery, and green peppers) for approximately 6-8 minutes, stirring frequently. Add the garlic and cook for an additional 30 seconds.

Reduce heat to medium-low. Take the set-aside roux and combine it with the softened vegetables. Mix well to combine and cook, stirring continuously, for 1-2 minutes.

Now, remember the pot filled with simmering broth (step 4)? Take the roux and veggie mixture and slowly add it to the broth. Stir continuously until fully incorporated. Maintain a simmer.

As the gumbo simmers, cook the okra. Melt 2 tablespoons of butter in a large skillet over medium heat. Add the chopped okra and distilled white vinegar and sauté for approximately 10-15 minutes, stirring frequently (see image).

9. Finish putting everything together.

After approximately 45 minutes, add the cooked okra, chicken, and sausage to the pot. At the same time, add the Worcestershire sauce, crabmeat, and sea scallops.  Simmer all together for an additional 20-30 minutes.

Finally, 5-10 minutes before serving add the shrimp and stir in the filé powder. Continue to simmer until shrimp are fully cooked.

There you have it! I really have tried to make the instructions as easy to follow as possible.

What to Serve with Gumbo?

Gumbo is traditionally served with a scoop of cooked white rice. The addition of rice helps feed a much larger number of people, making Gumbo both a practical and economical meal. Often, you will find Gumbo served with some kind of French bread, or, in some Cajun families, a side dish of potato salad.

There are three main gumbo thickeners – the roux, filé powder, and okra.

This recipe includes all three thickeners. However, if you cook your roux long enough, it will hopefully lose most of its thickening powers and just be there to flavor the stew.

What’s the Difference Between Gumbo and Jambalaya?

The easiest way to remember the difference between the two is that Jambalaya is, at its core, a rice dish (like paella). It has protein, vegetables, sometimes tomatoes, rice, and stock that are simmered together to make one big happy pot of spicy rice.

Gumbo, on the other hand, is more of a soup. Like Jambalaya, Gumbo contains a mix of vegetables, sometimes meat, and always shellfish, but the overall stock is thinner. It starts with a roux, and unlike jambalaya, typically contains okra (or filé powder) with rice that is cooked separately, added just before serving.

Before Cajun cooking ever existed, there was Creole cooking. In other words, Creole cooking came first. Creole cooking dates back to the 1700s when New Orleans was founded by the French in 1718. Cajun cooking, on the other hand, didn’t come to Louisiana until the second half of the 18th century when Acadian exiles, later known as Cajuns, relocated outside of New Orleans.

In general, Cajun cuisine is viewed as less refined, more of a “country food”, since Acadian exiles didn’t have access to some of the luxuries that Creole people had thanks to trade. As such, Creole cuisine is often viewed as “city food”.

This recipe is mostly a Creole Gumbo. Except where I’ve added chicken and made a roux using bacon drippings.

Okra (or lady’s fingers as my mother-in-law calls them) is a type of vegetable, and how gumbo actually got its name (see above).  Personally, I love okra.  If you can’t find okra, or you know you dislike this oddly shaped vegetable, replace it with an additional teaspoon of filé powder at the end of cooking. Remember, if you’re using frozen okra, always thaw before adding.

What is gumbo filé powder?

Filé powder, made from dried and ground sassafras leaves, is a thickener often found in various gumbo recipes.

What can I use in place of the gumbo filé?

What gives gumbo its flavor?

Gumbo gets its flavor from several elements, but two ingredients are most important for both flavor and thickening: the roux and either okra or filé powder.

What is andouille sausage?

Andouille is a smoked sausage made from chopped pork, onions, wine, and seasoning. It has a smoky, sharp taste, and is sometimes spicy.

Substitute with a different variety of smoked sausage, Mexican chorizo, kielbasa, or skip the sausage completely.

Can I use Creole seasoning in place of Cajun seasoning?

Yes. The two are quite similar to each other so trading one for the other generally isn’t a big deal. The primary difference is that Creole seasoning typically contains additional paprika, sweet basil, celery seed, oregano, and white pepper.

Is this gumbo recipe spicy?

Yes. This recipe is definitely on the spicier side. If you prefer a more mild dish, simply omit the added hot sauce. On the other hand, if you really love spicy foods, feel free to add a diced jalapeño at the same time as the holy trinity or garnish with hot sauce at the end of cooking.

Can You Freeze Gumbo?

There are several ways to freeze Gumbo.

If I had to pick one of these, I would pick option number 2. Most of the lengthy, time-consuming grunt work has been done already, but the meat (chicken, sausage, and especially seafood) hasn’t been added yet. Although chicken and sausage may freeze well, seafood does not.

Have you tried making this Gumbo Recipe? 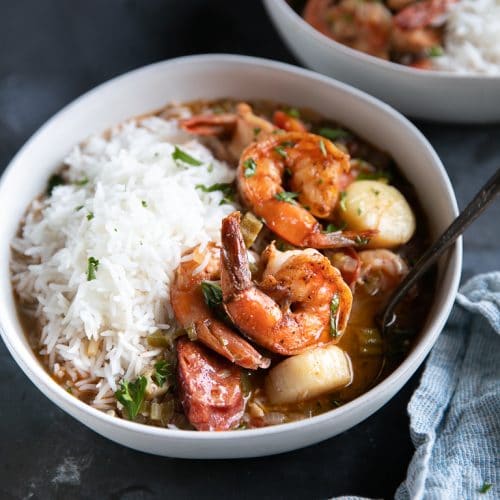 Keyword Gumbo, Gumbo Recipe, How to make gumbo
Did You Make This Recipe? Tag it Today!Mention @theforkedspoon or tag #theforkedspoon and please leave your star rating in the comment section below.
9.5K shares