Home » Seafood » What is Gumbo?

What is Gumbo? Plus answers to all your other questions about this New Orleans favorite, including the origin, types, ingredients, and how to make the perfect roux.

The exact origin of what we have come to know as Gumbo is somewhat debated, but it is often used as a metaphor for the melting pot of cultures that have come to exist in southern Louisiana. A perfect combination of French, Spanish, Native American, African, Italian, and German culinary influences, people from each of these cultures lived together in a small area of Louisiana in the 18th and 19th centuries.

In order to keep the history lesson somewhat short (it’s lengthy), I’m only going to touch on the key points.

Regardless of its official origin, Gumbo remains, for obvious reasons, the official state dish of Louisiana.

Like most well-known dishes, there are several variations of this popular stew. However, several key elements are found in nearly all Gumbo recipes- a stock, meat or shellfish (or both), a thickener, and the “Holy Trinity” of vegetables (celery, onion, bell peppers).

Why is Gumbo called Gumbo?

The name of the dish comes from Louisiana French. It is thought that it was named after one of two main ingredients common to gumbo recipes – okra or filé.

The word “okra” translates to ki ngombo or quingombo, also known as gombo, in several West African languages. It was these languages spoken by many slaves living in Louisiana starting in the 1700s.

On the other hand, filé, or ground sassafras leaves, were called by the native Choctaw people, kombo.

In general, Cajun cuisine is viewed as less refined and more of a “country food”. Acadian exiles, also known as Cajuns, didn’t have access to some of the luxuries that Creole people had thanks to trade. As such, Creole cuisine is often viewed as “city food”.

They both taste awesome, but what else?

Jambalaya: Jambalaya is made with protein, veggies, and sometimes tomatoes, which combine with rice and chicken stock, and simmer together to make one big pot of spicy rice. Jambalaya, like Spanish paella, is at its core, a rice dish. Unlike gumbo, the rice cooks directly in the broth, rather than be served on the side.

Gumbo: Gumbo, on the other hand, is more like a soup, or stew. Filled with a mix of vegetables, meats, and shellfish cooked in a flavorful stock made from a dark roux and thickened slightly with okra or ground sassafras leaves (filé powder). Unlike jambalaya, but similar to etouffee, gumbo is served atop or with a side of cooked white rice.

What is the “holy trinity” of Cajun Cooking?

The “holy trinity” of Cajun cooking, or “holy trinity” or simply “trinity” to some, is an aromatic mixture consisting of finely diced onion, celery, and red or green bell pepper. It is, essentially, the Cajun/Creole version of mirepoix, or soffrito.

RELATED: What is Mirepoix? How to Make and Use Mirepoix 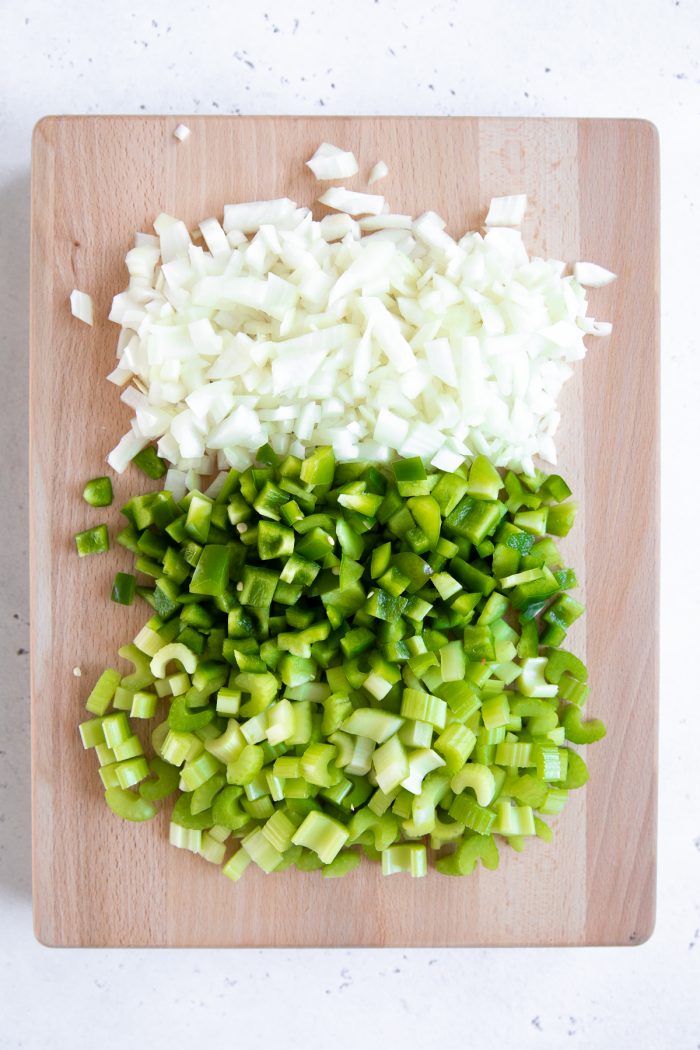 There are three main thickeners for any Gumbo recipe- Roux, filé, and okra.

Made from dried and ground sassafras leaves that grow natively in eastern North America. In general, it is recommended to add the Filé powder toward the end of the cooking process.

One of the most common thickening agents, okra offers a distinct and delicious taste and flavor. Traditionally, when okra was out of season, dried okra would be used in its place. You may also use frozen okra, just be sure to thaw before adding.

How to Make Gumbo Roux?

How to Make a Roux for Gumbo:

Ready to put your roux to good use? Try this Sausage and Seafood Gumbo Recipe!

If you try a recipe, please share it using the hashtag #theforkedspoon or by tagging @theforkedspoon.
56 shares