A guide to the most popular Types of Winter Squash! Including varieties, preparations, and recipes. With cooler temperatures on the way, let’s learn some more about these versatile and often underrated vegetables!

We hear the words winter squash and each of us pictures something different. The truth is that it’s a broad designation, made up of many different shapes, colors, patterns, and tastes.

What we know as winter squash can be pretty much anything in the gourd family, also known by its Latin name Cucurbita. Native to the Andes and Mesoamerica, this genus of herbaceous vines are hearty and relatively easy to grow, making them a staple on farms and in home gardens throughout the world.

According to the Modern Farmer, there are three major species you should know:

The two lesser-known species are Cucurbita Argyrosperma and Ficifolia, which contain some unique heirloom squash varieties, but are not cultivated on the same scale as the others.

Another thing to remember is that the genetic profile of summer squash does not differ drastically from the winter varieties. They are simply picked earlier in the season and take on different characteristics in the kitchen as a result.

With up to 30 accepted species falling under the umbrella of Cucurbita, the exact taxonomy of the fruit (yes, it’s a fruit!), is still up for debate.

Let’s take a closer look at the most popular types of winter squash and how they perform in the kitchen. 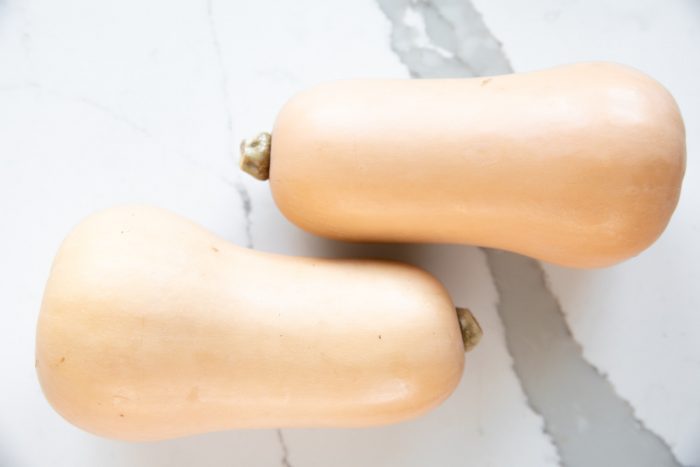 Named for their peanut-like shape, butternut squash has light-beige, matte-colored skin with bright orange flesh. Dense with a small seed cavity, butternut squash are a great option when preparing recipes that call for a large amount of squash (soup, for example). They are relatively easy to peel, chop, and roast and create the most subtly sweet soups when pureed. As one of the more popular squash varieties, it’s easy to find butternut squash in many grocery stores year-round.

Delicata squash, also known as Bohemian or sweet potato squash, is a cylinder-shaped squash that has bright yellow skin with dark orange or green stripes that run down its ridges. It has thin, completely edible, skin which does not need to be peeled before cooking. They cook fast, so try roasting delicata squash alongside carrots, mini potatoes, or whatever root vegetable you can find. It should all reach a perfect texture around the same time. When cooked, they have a nutty, earthy flavor and taste similar, some say, to sweet potatoes. 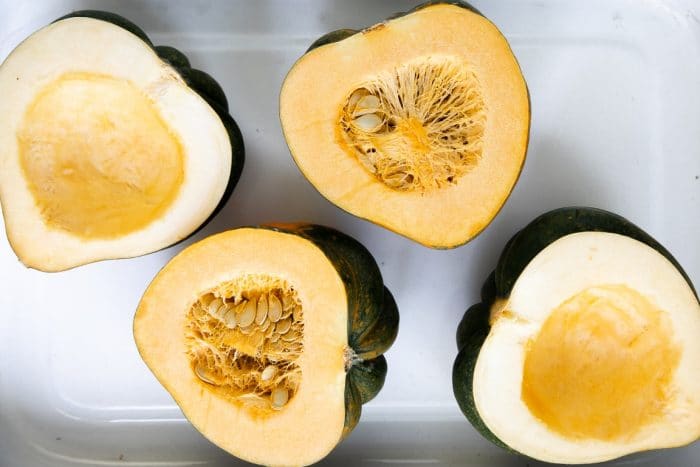 Until the recent rise in popularity of butternut squash, acorn squash was the most widely available squash in the U.S. Acorn squash are round with deep grooves that run from the stem to its tip and have a forest-green exterior with orange specks.  You want to pick the heaviest one available for its size since they have the most tender and tasty flesh and avoid ones that have too much orange as that is an indication that they are overripe. They are perfect for roasting, baking, steaming, mashing, and sautéing. Learn more by checking out how to roast acorn squash.

Kabocha squash is large, round, and flat at the root end. It’s skin is dark green with mottled blue-gray striping and flesh that is smooth, dense, and bright yellow. Kabocha squash are super sweet with tons of natural sugars and taste similar in sweetness and texture to sweet potatoes. The skin is difficult to peel, so they’re usually roasted cut in half or chopped into large chunks. The skin, even after cooking, keeps its shape, so it’s a wonderful choice for stews and curries. Although they may be less familiar, kabocha squash make an easy introduction to the different winter squash varieties – especially for kiddos! 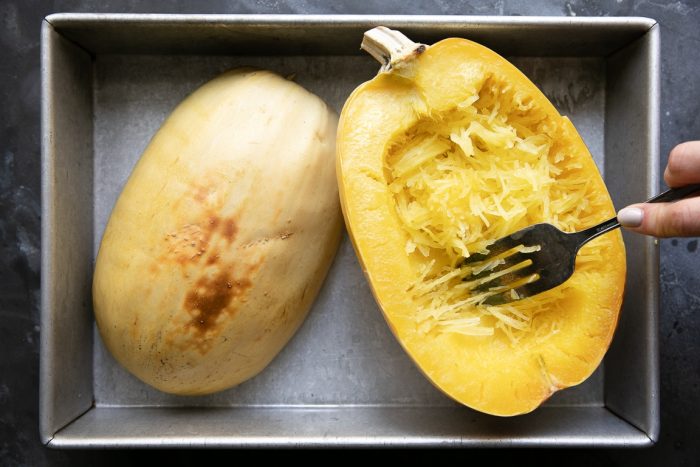 Everyone’s favorite pasta substitute, the Spaghetti Squash can be cooked in a variety of ways, including roasting it, boiling, steaming, or microwaving. They have a bright yellow outer skin with a golden yellow interior. Once cooked, the flesh falls away from the skin into tender strands, or ribbons, resembling spaghetti noodles. Unlike other winter squash varieties, the spaghetti squash isn’t particularly sweet. It does, however, have a pleasent, mild taste, allowing for various preparations and flavors.

Hubbard squash are one of the largest winter squash varieties. They have a very hard and lumpy, grey-blue exterior, with a sweet orange interior flesh. They may not be the most attractive of the bunch, but hubbard squash pack a ton of earthy, nutty flavor and offers the perfect base for layering spices and roasting. Hubbard squash can last for up to 5 months when stored properly. 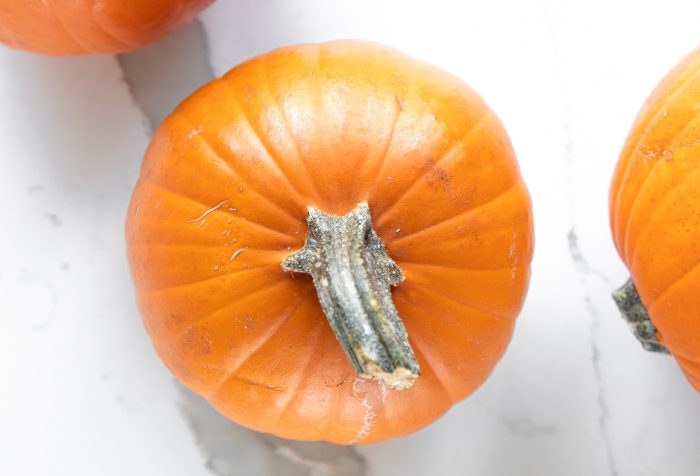 Pie pumpkins are different from the larger field pumpkins used to carve Jack-O-Lanterns in that they have been cultivated to taste sweet, not to grow large. Found in the same section of the grocery store as other varieties of winter squash, sugar pumpkins can be roasted just like the rest. Try making pumpkin puree, soup or make your own homemade pie filling!

Roast: Crank the oven up to over 400 degrees Fahrenheit and brush your squash a nice gloss of olive oil, or toss in a bowl with some seasoning if you have smaller pieces. A good 45-60 minutes of roasting (with occasional turning) should work fine.

Bake: Usually better for smaller and more delicate squash, you simply set the oven temp to 350 degrees and cook for a bit longer, usually around an hour.

Boil: Not the most exciting way to make squash, but will give you the ideal material to make soups and complex baked creations. Boil water first, add the squash, bring it down to medium heat and stir until you get the perfect texture.

Steam: Another not-so exciting way to make squash, but a method that is just as easy as boiling. Add a steaming basket to a large pot filled with an inch or two of water and add the squash pieces. Cover with a lid and steam until tender.

Puree: Use a blender (tabletop or immersion) to puree boiled or baked squash to the ideal consistency. A bit of extra butter goes a long way to add creaminess, and be sure to season accordingly!

Sauté: Tossing squash chunks on a stovetop pan can add a delightful sear to the exterior of your pieces. Throw in other vegetables and some protein for a complete meal reminiscent of stir fry.

Slow Cooker: Fill your slow cooker with chunks of squash and let it work all afternoon. You’ll have the most tender, succulent squash ever, without a ton of work.

Instant Pot: Allow your pressure cooker to do all the work for you in a fraction of the time. Depending on the size of the squash being cooked, you may be able to cook it cut in half or it may be better chopped into cubes.

Whether you roast up hearty chunks with a pinch of salt and pepper, create rich, creamy soups, or turn it into a healthy pasta alternative, the options are limitless!